A lone dwarf sat in the corner of the appropriately named Drowning Sorrows Inn. Five empty mugs sat in front of the Dwarf, who was half asleep and slumped against the wall. Hephaestas walked up to the intoxicated dwarf and put on a scolding look.
“You know, last time I saw you, you told me you were going to keep it down to three mugs at most.” he began at the dwarf.

The lump of hair and mass stirred and began to speak, slurring his words as he did.

“Ahh, you’s sound juss lik’ this Forge-Folk I once knew, he owes me a boat that he does! An’ ish wasssnt fiiive – I’s only had t-t-twwo!” the creature forcefully whispered, hiccuping small icy cold breaths as he slurred his way to the end of the sentence.

Hephaestas popped up a vial from his breastplate pocket, emergency condensed Oilspresso, potent stuff. For should he ever feel so inclined, Glaive had sent it to him as a Festivault gift last Winter – or, maybe it was longer…eh, that didn’t matter. This stuff never expired. The tinkerer flicked his wrist and a small pneumatic spray bottle clicked out of his hand. Loading the Oilspresso container, he reached out and grabbed the (smelly) dwarf’s head, opened his mouth, pointed the device into his mouth and in one sturdy click, launched 20cc’s of some of the strongest and purest Oilspresso Hephaestas had… well, never had the chance to have.

The red bearded dwarf looked up at his current irritater.

“Hooo mah sake’s alive, could ya be? Ist dat reeealy yeeh?” the small man exclaimed in his heavy dwarven accent.

“It is good to see you again, Barri. I had hoped you’d be a little more sober these days but uh…. hang on, did you say you LOST the boat I gave you??” The alchemist lashed. END_OF_DOCUMENT_TOKEN_TO_BE_REPLACED 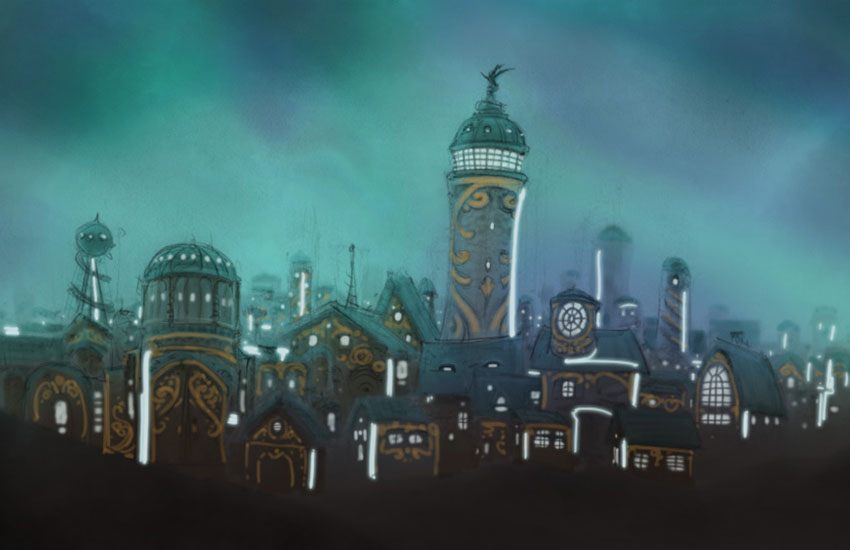 “Oh you’re magnificent. ” the Warforged Artificer exclaimed as he finally finished the three clockwork creatures. “I’ll name you two Perdix and Icarus,” he said to the two Defenders, crafted in the likeness of canine forms. “And you, ya little fireball,” he began to the miniature golem, who was currently busy beating up the remnants of a lifeless Modron form Hephaestas had planned to one day study. “You shall be called Daedalus, and aid me in my workshop.” The pint-sized golem turned and looked at his creator, gave a questioning look (as much as a featureless golem can) and bounced over to him. “Yes, very good, bounce around my little friend. I’ll begin attuning a docent for you, to better control your…abilities, before you learn all I gave you.” The smith chuckled to himself. Yeah, there certainly would be some growing pains as he and his new creations learned how to work together. He sat back in a chair. He wasn’t tired, no. Fatigue was something he learned about decades ago, a sickness that plagued the creatures of flesh. No, the word he was searching for was more or less drained. He was drained of magic, and of course of some resources. He needed to wait a little while for his abilities to reach full potency again.

Ahh well, he thought, I’ve got some time to kill. An oilspresso sounded like a fine pick-me-up, and he’d earned it.

END_OF_DOCUMENT_TOKEN_TO_BE_REPLACED 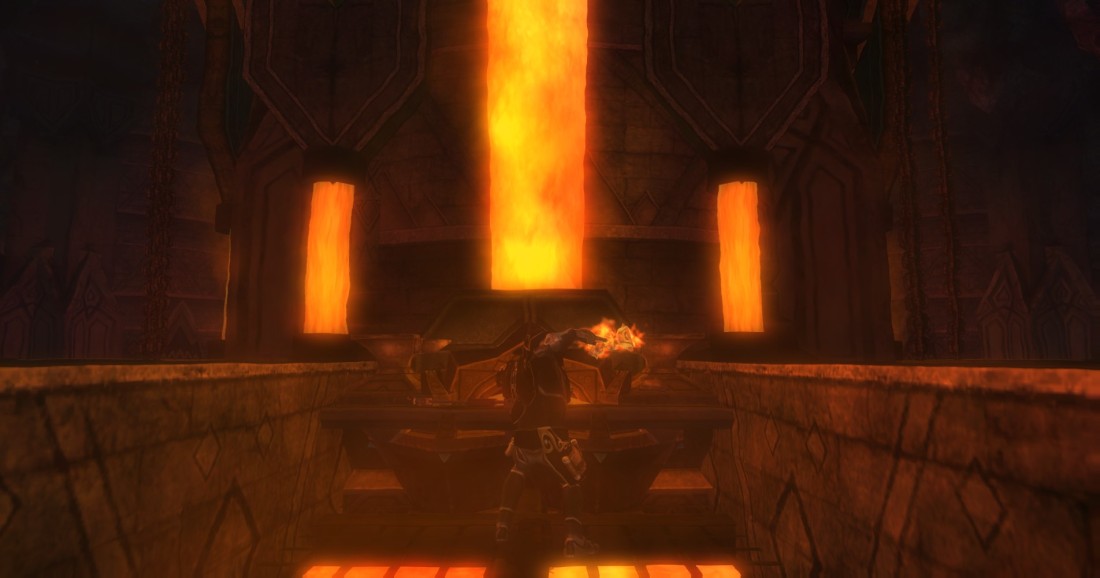 After no small amount of chatter and diplomacy with the Magewrights of House Cannith about his long absence, he finally made it to the Fernian Conduit Floor. His floor. Hot as it ever was, the sheer manifestation of the plane of Fernia, somewhat artificially produced, but powerful all the same – warmed him to his very core.

END_OF_DOCUMENT_TOKEN_TO_BE_REPLACED

Now with a full purse from his recent adventures in Stormreach Harbor and his memory slowly returning, he felt much more confident traveling. He took the first available Lightning Rail to House Cannith. The ride was pleasent enough, and quick. He handed the conductor a tip for the smooth travels, and was soon at the House Cannith gates.He approached the guards.

“Why, Hephaestas, sir” the Artificer promptly responded, knowing the guards surely knew him.

“Why, I thinks I remember me a Hephaestas – yeah, right shiny fella. High up there, kinda guy. One o’ them alchemically minded buggers, yeah. Not one of them common laborer drones, heh. How’s we to know you’s him and not just some poor forged sop trying to stir up trouble? Got ‘imself a shiny piece of armor to match the Mist’r Hephaestas, eh? ”

“I assure you friend, it is I, Hephaestas. High Alchemist of Cannith, first born to the Warforged, and Master Artificer to the House.”

“Right yeah that’s some flowery language there mate,” the guard on the right butted in, “but if you was really the real Hephaestas, you’d lift your cowl and show us your sigil like protocol requires.”

“Ah, yes, gladly sirs. You’ll have to forgive me, I haven’t been myself as of late.” Hephaestas remarked, and pulled up his cowl.

“Oh…Well I’ll be sent to Khyber – it is you.” The left guard exclaimed in relieved shock and embarrassment, “The sincerest of apologies, Master Hephaestas, we just been told to be a lil more careful about the Warforged we let in lately, special orders from Cannith’s Council – now, ya didn’t hear it from me sir, but I’s been noticing Master Toven been actin’ mighty anxious lately, this high security nonsense is his doing. He’s been working round the clock- and I mean like twice as much as usual, sir. Jus’ be careful, sir. Good to see you round again, eh. And again, we’s sorry for the hold up, we just been deflecting pompous forged tryna get in to the House lately – we ain’t been ourselves either.”

“Never you worry, friends. You’re doing your job, and We appreciate that.” Hephaestas spoke, as if he was well aware of the happenings, he quickly thought up an alibi for his undoubtedly long absence from the house. “I’ve been on a private diplomatic trip as of late, hoping to ease some of our outgoing relations troubles. I’ll touch base with Master Toven, hopefully I can help ease his mind a bit. Here’s hoping this high security wave passes by soon enough.”

“Righto, sir. Good on you. ” the guard replied, and the two of them began to open the gate. The clockwork mechanisms began to whirl and spin, the clatter of Cannith’s more primitive machinery began to press open. The bronze bull house crest sputtered smoke, and the gate sprang open.

A squadron of Warforged and Human guards lifted their armaments and saluted the Cannith Alchemist. Hephaestas nodded in acknowledgment and walked forward. His cerebral mainframe scrambling to remember names and units fast enough. He was part of the Cannith Council, he needed to remember this stuff! He needed to fully diagnose his internal systems.

He needed to get to his workshop.

…He was an Envoy. And a prototype Envoy at that. The Original, actually. Cannith never made another like him. It explained quite a bit about him too, why he was so driven to tasks that did not involve killing, but rather, involved creating – of course… creating tools that could be used to aid in killing… No matter.

He was the Original Envoy. Every unique Warforged was modeled after him. That was… A lot to take in. And so long ago… It’s no wonder he had issues remembering so far back. It also explained why he was immune to certain overrides given to him by other Artificers and tinkerers. He flat out did not have the cookie-cutter design model that the Warforged that came after him had.

He had been built for artiface. Built to be augmented. Built to stand the tests of time in ways other warforged had not. It all came flooding back. He was meant to be altered. He was built at his core to do it. He was literally a cut above the rest, with an intense understanding of creation, life, and how things “ticked.”

So much made sense now, it explained why he had tinkerer and smith’s tools built into his fingers and arms. It explained why he had such an adept knowledge of languages. He knew 5. He was a living encyclopedia, a walking blueprints set. The Primus of Eberron, meant to oversee the creation of other warforged, of hulking titans and small clockwork beasts…

With this memory now fresh in his mind, his past flooding back to him – Hephaestas touched the sigil stone on his face; a hammer over an anvil. Warm to the touch. He knew exactly what he had to do next.

He went to go find his workshop. The Warforged Heartstones he had gotten in Stormreach harbor were clutched in his hand.

He needed to get to his forge.

Although a tad late, July’s Unearthed Arcana still delivers! Not one, not two, but three revised races in addition to a brand new one! We have updated versions of Changelings, Shifters, and Warforged and for the first time we can play as Kalashtar! While we won’t be diving into the lore of these races (there’s a lot to cover here!), I would recommend giving those parts a read!

As is my usual way, I will not be comparing the revised options to their older versions, but rather seeing how they stack up to published options. If you would like to add your thoughts on how these stack up to their old versions we would love to hear it in the comments! Also please note, I’m not getting as analytical here as I normally would like to based on the sheer volume of races/subraces, though I try to provide insight into…

The blogger behind the blog! Hi! I’m Hephaestas, or Heph for short. I’m a 2D & 3D graphic artist, small streamer personality, Discord addict, and fantasy enthusiast! And yes, before you ask, I know I spelled the name wrong 😉 END_OF_DOCUMENT_TOKEN_TO_BE_REPLACED

Backstory of Hephaestas, “Smith of the Gods”

Unsure of how old he is… he is a he, yes? He isn’t even sure of that anymore – his cerebral mainframe has had the need to delete any information deemed impractical or unhelpful in order to store more data on what he is programmed at his core to do.

All he remembers is he has devoted himself to learning any new secrets to the science of magic and metallurgy. But lets turn back a page or two…

END_OF_DOCUMENT_TOKEN_TO_BE_REPLACED

Welcome to the newest hub for all of my internet adventures! I’m your host, Hephaestas, God of Fire and the Forge!

I’ll be using this site as a center for creative fantasy writing, guides and builds for Dungeons & Dragons Online – and perhaps regular old D&D too.

Thanks for visiting and be sure to check back regularly to see what I’m up to!